Behind The Scenes of the Lion Cub Drawing

The Lion Cub, a new favorite for many of my fans, is the third in my Threatened & Endangered series of drawing, focusing on animals that are considered threatened, endangered, or vulnerable around the world. 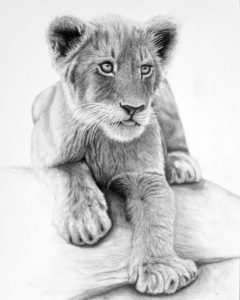 The Beginning Of The Series

The first drawing in the series was the African Elephant, at 18×24 inches big. That drawing began as an experiment with a larger drawing using graphite and colored pencil together to create a black and white drawing, and it was so popular and I enjoyed making it so much, it sparked the idea for this whole series. 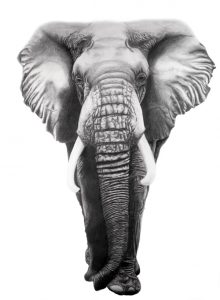 Each drawing in this series is larger than my typical drawings, being between 16×20 inches to 22×30 inches big. They’re all in black and white, which I think has the ability to enhance the emotion of the image, something I’m really striving to have be an important part of this series. And all of their backgrounds are being left stark white, both to bring more attention to the animal subjects, but also to represent the fact that their habitats are disappearing and soon they’ll be without a home.

The second drawing in the series was Black Rhino, at 22×30 inches big. 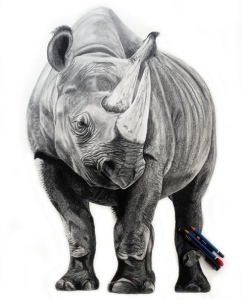 Each of these drawings has gained their own following and despite the lack of color, they’ve become extremely popular. I’m emotionally connected to this series even more than my typical work, and feel like I’m working toward something bigger than myself. It gives me great pleasure to continue this series!

Drawing The Lion Cub – The Beginning 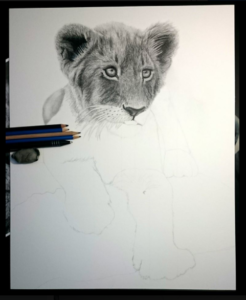 I wasn’t sure at this point how much of the rock I was going to draw, wanting to leave the backgrounds of these pieces in my Threatened & Endangered series mostly blank.

I began with the upper left part of the drawing and moved down and to the right. Part of the reason for this is because I like working on the head of an animal first. The other part is because graphite smudges easily and I’m notorious for resting my arm and hand on the paper and smudging with my drawing hand, so that is less likely to happen if I move from the top left down. 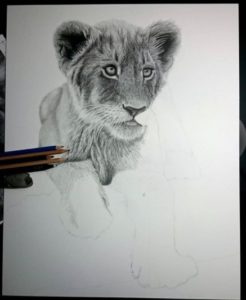 I layer the drawing similarly to how I draw with colored pencil, with the lighter layers first, mapping out the drawing and the shapes and patterns in the fur. Then I build up with the darker layers to bring more contrast and details to create a more realistic and intense image. 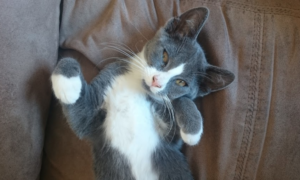 I went to a wedding out in California in the middle of this drawing, leaving Juno in charge of my studio while I was gone. As many of you read about on my Facebook page (because you follow me on Facebook, right?) and in my past newsletter (because you’re signed up for that too, right?), there was a bit on an incident in my absence.

Apparently Juno walked into my studio one day while I was gone and mistook the partially finished Lion Cub drawing for a real lion.

Without fear or hesitation, Juno jumped into action and leapt up onto the lion, attacking it and defending her home and studio like the fierce guard she is. I mean, just look at that ferocious face.

After successfully clawing the Lion Cub (mostly warning shots around the sides), she felt like he was sufficiently subdued and moved on, waiting until I got home to discover the evidence of her brave act. 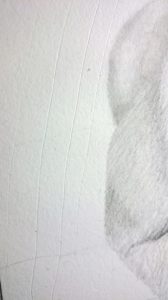 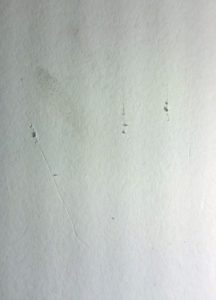 So then the question was, what should I do? Should I redo the entire image, from scratch, so to speak? Or should I keep going with this one and have the original have some damage to it?

At first my decision was I would redo it. This came right after having another drawing get damaged and having to set it aside to redo it eventually, so it was a hard hit.

But then I thought about it more and looked more closely at the damage. I changed my mind. I was going to keep going with this piece just the way it was, scratches and all. If nothing else, it’ll have a good story! And it is now the first drawing on which Juno and I have collaborated!

The scratches are mostly on the background and barely noticeable now unless you get close to the drawing. 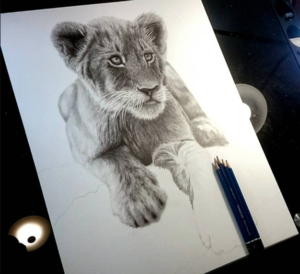 After plugging along with the drawing, I came to the background. The decision there was, how much of the rock detail should I add if I want to keep the backgrounds in this series of drawings mostly blank? So I compromised and added a little detail, but let it fade to the edges.

Don’t forget this drawing, as with others, is available in many different forms and that some of the proceeds of prints sold will be donated to the African Wildlife Foundation to help lions maintain their numbers in the wild. Here’s just a few of the options!