Behind The Scenes Of The Black Rhino Drawing

Many of you know about my African Elephant drawing I completed last year, shown below. That was the first drawing in a series I’m dedicating to Endangered Species. (Don’t forget to scroll to the bottom to let me know which animal I should do next in the series!)

This specific series is bigger than my other drawings, with each piece being at LEAST 18×24 inches big, most of which will be even larger. They’re all in black in white with a stark white background, not only to bring attention to the animal, but to indicate their habitats are disappearing and eventually, these animals will be extinct if we don’t do something.

The Second Drawing Of The Series

I have now finished the second drawing in this series, my Black Rhino graphite and colored pencil drawing, which was finished just in time for World Rhino Day (September 22nd).

Rhinos are critically endangered, likely with 5,000 or less left in the world. 10% of the proceeds from this drawing and prints sold of it will be donated to the World Wildlife Fund. The WWF created the first Rhino sanctuary in Kenya and the plight of the Rhinos is one of the reasons the WWF was created!

This drawing is quite large, at 24×30 inches big, and larger than my drawing table! In order to work on this drawing, I had to move my drawing table away from my wall and bring over a large piece of cardboard as a backer. Of course then I realized that as I was drawing, the lines from the cardboard were showing through in my drawing, so I also had to put a large piece of smooth mat board behind it to help keep it sturdy and provide a smooth backing for me to work on.

It took a while to just grid this paper and draw the outline drawing of the Rhino. Then, like with most of my graphite pieces, I started from the top left and moved down and to the right. I do this because graphite smudges easily and I’m right handed. I also have the habit of resting my hand and arm on the piece I’m working on, so I smudge my work easily! Working from top left and down to the right, it helps avoid this problem and lets me work the way I like without too many worries.

I started this drawing in the beginning of the summer, but I had a commission and some other projects that needed to take priority, so I had to set it aside for a while. It sat on my drawing table looking like it does above for a couple months until I finally had a week where I had no commissions and I had some time to draw my own work again.

That’s when this piece started to take shape, and quick progress was made. 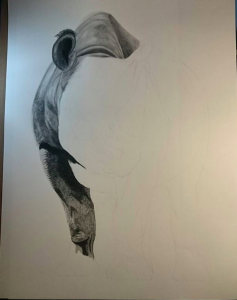 I started with the left side, the top, and the left ear. I layered in three different shades of graphite (2H, HB, and 3B), and then used a black colored pencil for most of the textures and the darkest areas. 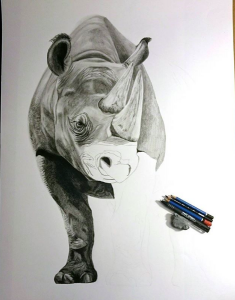 I knew World Rhino Day was Friday, September 22nd, and it was that week that I was finally able to work on this drawing. Therefore, my goal was to finish the drawing by that day, if I could! 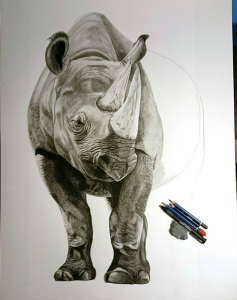 I worked for hours each day that week and kept posting the progress shots on social media.

Thursday, the day before World Rhino Day, came and went and I was almost finished, but not quite, so when I woke up Friday morning, I went to work straight away on the drawing and finished it by about 11am!

What’s Next? I want your opinion!

You can also buy photographic (not archival, but cheaper) prints of them and others in my Etsy shop here.

Now I am in the process of deciding what my next drawing will be in this series! Here’s the options and tell me which one you think I should do next in the comments!

Which should be the next in my Endangered Species series? Tell me in the comments!

4 thoughts on “Behind The Scenes Of The Black Rhino Drawing”